Case Highlights: Client : Leading Glass Manufacturer, Europe The Objective : To study the effects of different loading conditions on racks, and also investigate the structure’s response in the event of earthquakes, in order to avoid the rack failure.

Solution: Two rack designs were successfully evaluated under different loading conditions and an optimized rack design was suggested, having minimum deformation. Also, a seismic analysis was performed to measure the deformation under the dynamic load application. 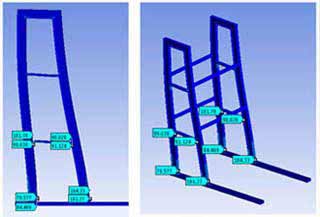 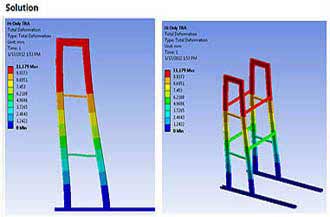 Racks are significant in industries for storing or stacking goods safely. Their design however, is of prime importance as they are subjected to different loading conditions. It is obvious to find the rack deformation under the effect of static loads. Also, during the event of dynamic loading conditions such as earthquakes, the rack installed on the ground surface should ensure maximum resistance to movement and followed deformation.

One of the leading glass manufacturers in Europe came up with an identical problem related to their rack design. The customer’s concern was to develop an optimized rack design, which apart from resisting the loads arising due to the stacking of boxes, would also resist deformation and failure during the event of earthquakes.

In order to ensure the rack’s strength against deformation, different stacking arrangements were tested, while also modifying the angle of one of the rack’s leg. The loading conditions were accurately applied on the geometrical model and the subsequent deformation was calculated through finite element analysis. With different loading configurations and leg angle, an optimized design with a suitable stacking arrangement was proposed, which resulted in minimum deformation.

To further test the rack design for dynamic loads, a seismic analysis was performed to record the structure’s response against a spectrum representing an earthquake having a Richter scale of 7.1.