Solution: The performance of the fifth wheel assembly coupled with the frame structure was analyzed through structural analysis, and the resulting stress and deformation values were found within the permissible range. 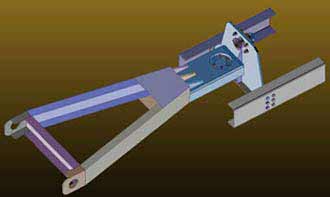 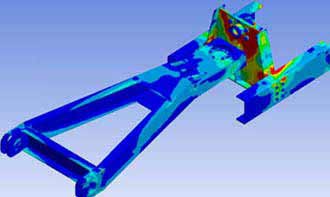 Fifth wheel assembly is an essential link between the trailer and towing truck. Serving as a coupling, the assembly is expected to undergo deformation due to the stresses developed by forces generated by vehicle motion and road surface. It is crucial to consider such crucial parameters while designing the fifth wheel assembly, in order to prevent the linking system from failure.

A leading engineering consultant from Australia, required design solution for the fifth wheel assembly used in heavy duty trucks. Important concerns from the client were to obtain an efficient design to withstand load and stresses, without excessive deformation.

The fifth wheel assembly was virtually developed through CAD tools, in order to obtain precise results through structural analysis. Individual components as well as the entire assembly; including the connected frame structure was analyzed through the application of physical constraints and load values.

It was observed that the stress values were exceeding the permissible range, suggesting a design modification, in order to avoid deformation and failure.